Posted on November 30, 2022 by Faculty of Arts and Sciences

A special course Erdrich taught this fall marked two 50th anniversaries at Dartmouth: coeducation and the founding of Native American and Indigenous studies.

Looking back on the course she taught at Dartmouth this fall, the celebrated poet Heid Erdrich '86 says her students left her "in awe."

"Students are more diverse, more openly intellectual, and wonderfully curious and creative," Erdrich says. "I love their ability to take charge of their projects and their fearlessness in the face of challenges—and it was a challenging quarter on campus. Their strength has left me in awe." 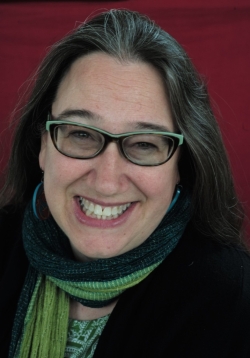 "Each alumna I asked to visit class was a Native author, artist, or creative, or took some activist stance as part of their life's work," Erdich says. "I tried to balance a range of cultures and perspectives as well as professions."

"We decided to use this long-standing course as a vehicle to invite Native alumnae from various career paths to discuss how their experiences and perspectives as Native women influences their work," Duthu says. "The success of this approach hinged on attracting a visiting faculty member with relevant teaching experience but also with deep knowledge about and connections throughout our extensive Native alumni network. We were thrilled that Heid Erdrich accepted our invitation."

A member of the Turtle Mountain Band of Ojibwe, Erdich has authored several poetry collections and received numerous honors, including awards and fellowships from the Native Arts and Cultures Foundation, Minnesota State Arts Board, Loft Literary Center, and First Peoples Fund. She has edited two anthologies of poetry by Native poets, New Poets of Native Nations, and with Laura Tohe, Sister Nations: Native American Women on Community.

Throughout the course, Erdrich also assigned readings that exposed students to a wide variety of Native academic disciplines. "The reading for the course foregrounded Native and Indigenous perspectives on decolonial methods of inquiry, Native and Indigenous women's power in contemporary cultures, Native women's literature as a decolonial project in mapping homelands, Native art and modernity, film and media as Indigenous perspectives, and more," Erdich says.

Guest voices were included in the readings via books or articles they authored as well as interviews with them. Students were also assigned readings that included trips to the Hood Museum of Art study room and engagement in Dartmouth's Indigenous Peoples Week activities.

Native American and Indigenous leaders who took part in the class include Jodi Archambault '91, a strategic adviser for the Minnesota-based Bush Foundation who also worked in the Obama administration; Janine Bowechop '89, executive director of the Makah Culture and Research Center in Washington state.; Aja DeCoteau '03, executive director of the Columbia River Tribal Fisheries Commission in Portland, Oregon; Angela Erdrich '87, MED '94, a pediatrician focused on underserved communities; Pulitzer Prize-winning novelist and poet Louise Erdrich '76; Mishuana Goeman '94, professor of English and Native American studies at the University of Buffalo; Kalina Newmark '11, a brand manager for Starbucks products at Nestle`and chair of the Native American Visiting Committee at Dartmouth; singer and songwriter Mali Obomsawin '18; and Anna Tsoularakis '99, a visual artist whose works have been on display in museums around the world. (Louise and Angela Erdrich are Heid's sisters.)

"It was amazing to meet and hear from so many phenomenal Native women alums," Emma Tsosie '25 says. "And it was really incredible to be taught by an Indigenous woman, especially one so wonderful. I love Professor Heid's uniquely Native humor, her willingness to bring up tough and engaging topics in class, and her always warm, open, and genuine presence every day."

"My best hope is that students engage their own creativity as a critical response and value the making of art and music," Erdrich says. "But most importantly, I hope they will always recognize Indigenous creativity as a mode of resurgence that creates real change in the world."